Rapid Reviews: Gotta Get Caught Up!

Time to get this thing back on track, don't you think?

We're about to hit Oscar season once again and I've been incredibly remiss in updating this blog. Despite multiple promises to update more this summer, I failed miserably at my task. So hopefully (cross your fingers), this Rapid Reviews post is the beginning of a new, strong season.


I know. If I cry "wolf" one more time, you readers are just gonna stop coming back. But without further ado, let's check out what I saw at the movies this summer.

After the jump!
Awkwardly posted by Kevin at 9:52 AM 1 comment:

Oscar Predictions: They're Alive! So Am I!

I know, I've promised that this blog has come off hiatus like three times now, so this promise will probably turn empty anyway. But we're back! And we've got new Oscar predictions ready for you! Check out the reviews page for some new ratings, too (I probably won't get around to reviewing X-Men or its prequel, but I will try to review the fantastic Midnight in Paris). And since we're at mid-year, a quick look at what's topping my list of the year is probably forthcoming.

Stick with us! You guys have boosted us above 15,000 hits and it's much appreciated!

Awkwardly posted by Kevin at 9:18 PM No comments:

MVM: You Belong with Taylor Swift

Music Video Mondays comes back from its hiatus with possibly the blandest, most inoffensive video to ever become controversial. The controversy behind "You Belong With Me" is, of course, more due to Kanye West than anyone else, but for that reason alone, this video's likely to become the one remembered among all the Beyoncé and Lady Gaga videos of the era.

Really, there's not much plot to this one--girl likes boy, boy has girlfriend--but it poses the same blonde vs. brunette questions that Gwen Stefani's "Cool" did, and like Gwen, Taylor is playing both sides of the coin here. Let's take a closer look and see some of the drama behind the façade.

After the jump!
Awkwardly posted by Kevin at 10:27 PM No comments:

...I have no excuse. It's summer. I should have started both Music Video Mondays and Netflix Pix this week. They'll come next week, I promise. (The piece on The Good Wife, however, might forever languish in development issues.)

Revised Oscar predictions post-Cannes will also be up sometime this week.

Awkwardly posted by Kevin at 4:27 PM No comments:

I'm stalling out on my attempt to write a piece about The Good Wife, so what better time to attempt to predict what will be nominated for the top Emmy awards come...whenever the Emmy nominations are announced? (I think it's July--I really have no idea. This is as random as projects come on Awkward is What We Aim For.) Be forewarned that I suck pretty hard at predicting the Emmys simply because unlike the Oscars, where the pool is fairly small and narrowed down by a bunch of precursors, the Emmys are a bigger pool with more populist swing at times that have only a couple precursors that happen six months before the Emmys even nominate. So this is a bit of a wild goose chase, really. Come take it with me!

The image above is the perfect encapsulation of why this season of FOX's Glee has gone so far off the rails: it has sacrificed everything important about itself to find a happy ending for the character who best represents showrunner Ryan Murphy himself: Kurt Hummel, once a brilliant supporting character with fantastic lines and solo numbers now nothing but a shell, a pariah and martyr who can be almost painful to watch.

Harsh? Maybe. But Glee needs someone to be harsh who isn't a professional critic and isn't a rabid fan who thinks characters are being "mistreated" by the show. It needs a voice of reason. It needs someone to say that this creature, this phenomenon that the little show about a show choir has become isn't beautiful or wonderful. It's ugly, the very essence of glum. 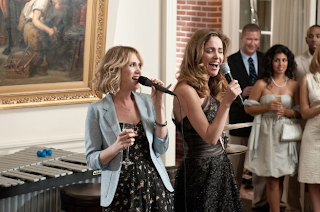 This one isn't gonna take too much waxing poetic: Bridesmaids is brilliant. A sure-to-be-iconic film that translates all the greatest bits of Apatow-style humor and mixes them with the subtle (and sometimes not-so-subtle) bitchery of Mean Girls. Incredibly quotable and boasting magnificent performances from all six central ladies, from the scene-stealing antics of Melissa McCarthy (thank GOD for this breakout--long time coming since Gilmore Girls) to the sublime divahood of Rose Byrne (her Helen is truly a goddess for bitches-in-training everywhere) to the truly marvelous anchor performances of Saturday Night Live veterans Kristen Wiig and Maya Rudolph, with strong performances from Ellie Kemper (The Office) and Wendi McLendon-Covey (Reno 911!) that have fantastic moments when you're probably too busy laughing over whatever just happened.

The movie is emotional while still being hilarious. It's moving while not getting bogged down by the shmaltz. It's well-written with varying types of humor but doesn't pander. Bridesmaids is here for you to love it and if you don't, it doesn't give a shit. Trust me, there's a million more people laughing out there for every one who doesn't. Truly a fantastic film and one I can't wait to see again.

I honestly have nothing else to write. It was that great. A

Have you seen Bridesmaids? Do you have anything else to say to supplement my breathless, wordless review? Take it to the comments!

Awkwardly posted by Kevin at 11:25 PM No comments:

The Voice: I Don't Love This Cheesy Show

Welcome to The Voice, the latest (yep, arriving to this trend pretty late) and greatest (eh, not so much) talent show brought to you by NBC. The show features country singer Blake Shelton, big-belter diva Christina Aguilera, "Fuck You"-singing phenomenon Cee-Lo Green and Maroon 5 frontman Adam Levine as "coaches," the friendly alternative to judges, trying to find . In this aspect, it's ripping off The X Factor before it even reaches U.S. shores as well as ripping off American Idol. The Voice was obviously meant to take down the original at its weakest point. (Of course, that didn't work out as expected.)

In all, the show is kind of a big ball of cheese that is saved by the great judges coaches and how much chemistry the panel shares. But is a show that's all about the ju coaches going to work in the long run?


After the jump!
Awkwardly posted by Kevin at 4:34 PM No comments:

American Idol: Haley and the Rest

Here are words I never thought I'd type: Season 10, the first without Simon Cowell as judge, is the best season of American Idol ever.

Take a moment to spit out your arguments. "The judges suck," "The contestants aren't that good," "They're being a bitch to poor Haley Reinhart," etc.

Well, the judges may be inaccurate, but they most certainly do not suck. They're strong enough personalities to sell whatever crap they're offering well--and it's honestly not their mission to provide criticism, it's to be entertaining. Jennifer Lopez and Steven Tyler have been and continue to be truly entertaining. (We'll forget Randy Jackson exists.)

And yes, they are probably really screwing with poor Haley, but they've also (intentionally or unintentionally) given her the chance of a lifetime, as all the manipulation has led to a final three finish for the Illinois songbird.

But let's talk about those contestants and how "not good" they are. Because let me tell you--they're actually the best bunch this show has seen since Season 5 and possibly the best bunch ever. (Yes, they even beat Season 8!)


After the jump!
Awkwardly posted by Kevin at 12:57 PM No comments:

The State of the Blog

Hi, blog. It's good to be writing to you again. Or on you, more specifically.

I know it's been a while. I'm sorry I had to take that hiatus from writing, but school is more important than passion projects. But I'm back! Did you miss me?

Oh, don't be so cruel, blog. I didn't leave you completely alone! I was doing some work behind the scenes, and hey, I wrote that review! I'm here to stay this time...until school forces me to leave you again. Sorry. I know you're a little like the narrator in that Sugarland song but you know what? It's great when we're together. (And no, that video won't be my next Music Video Mondays entry. It's a blonde bitch on a black background. It's no fun to rip apart.)

Speaking of that series, it'll be starting up again come next week. Unlike other series on the site, I'm not gonna formally announce a schedule or even how much it'll come around, but you can expect entries fairly frequently (every other week is sounding reasonable right now, but don't hold me to that) and some great videos are gonna be ripped apart soon. (I'm thinking of doing a weeklong series devoted to Lady Gaga videos, but I don't know if that's not too ambitious...TBD on that one.)

Netflix Pix is gonna start its summer season, though, and I'll have a schedule to follow out soon. Our season premiere is gonna be next Tuesday and we're gonna feature two performances by an underrated, underused actress: Rachel Weisz. (She's also undermarried: poor Darren Aronofsky!)

But blog, since all this is coming next week, along with updated Oscar predictions and more announcements, what will we be doing this week?

Hopefully, we'll have a couple more movie reviews up this week (Bridesmaids and Thor are on tap), but expect an analysis of the current season of American Idol up before Wednesday's performance show.

I'll also get up pieces on the current season of Glee and why I think it's such a failure (this will relate and reference back to my last piece expressing dissatisfaction with Glee, so read up!) as well as on the second season of The Good Wife after the finale on Tuesday. Finally, keeping in the spirit of writing about television, I'll try to get pieces up about The Voice and Happy Endings (one's my new favorite show and the other, um, is not) in the next couple of weeks.

And we're gonna try and start a new series featuring guests called "Awkward Conversations" that could be stellar or could be disastrous--we're gonna take that journey on the tightrope together.

Awkwardly posted by Kevin at 10:12 PM No comments: